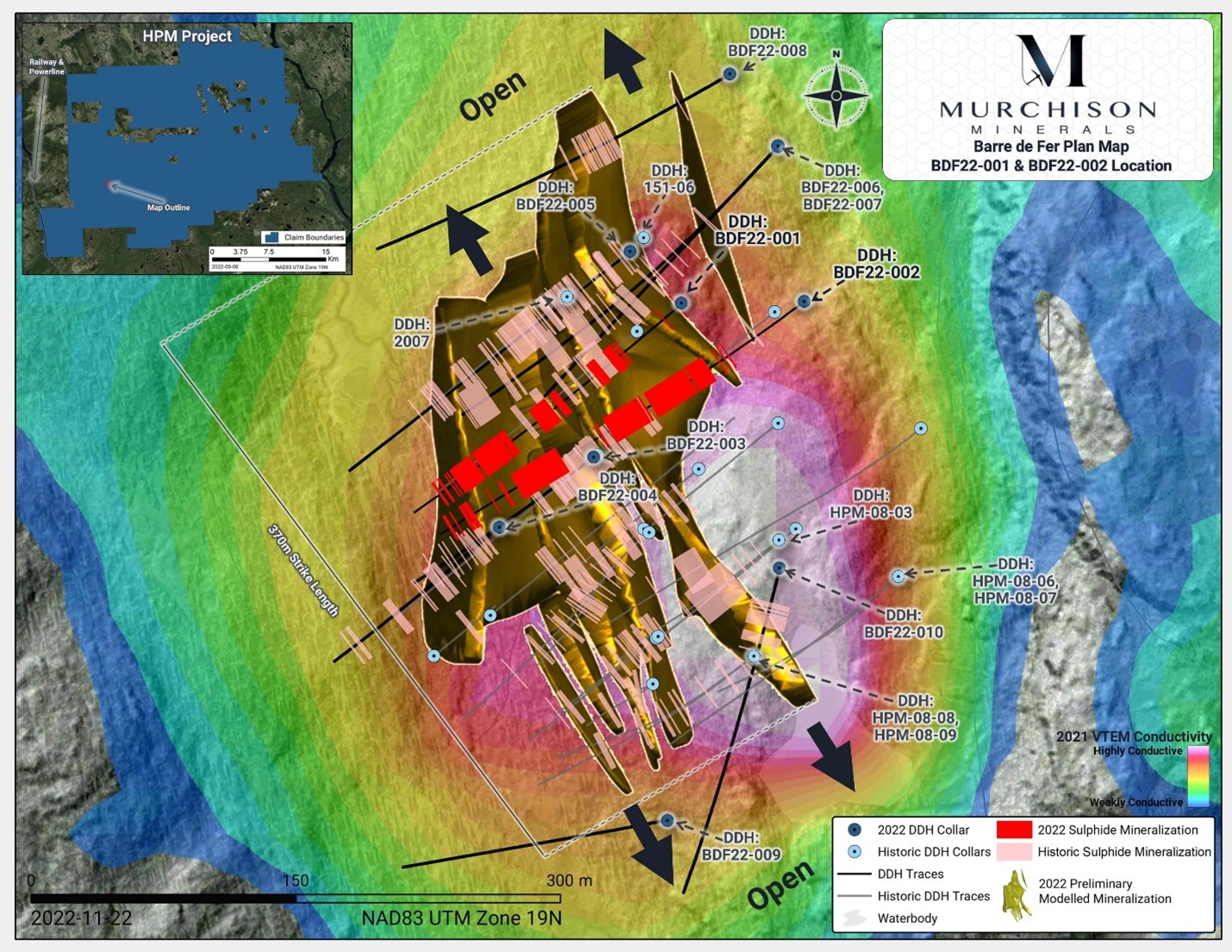 The results demonstrate the near-surface, high-grade nature of Barre de Fer, and the potential for future expansion of the zone. In advance of the maiden resource, slated to be released in Q1 of 2023, the Company will continue to release assay results from the summer drill program, as they become available. 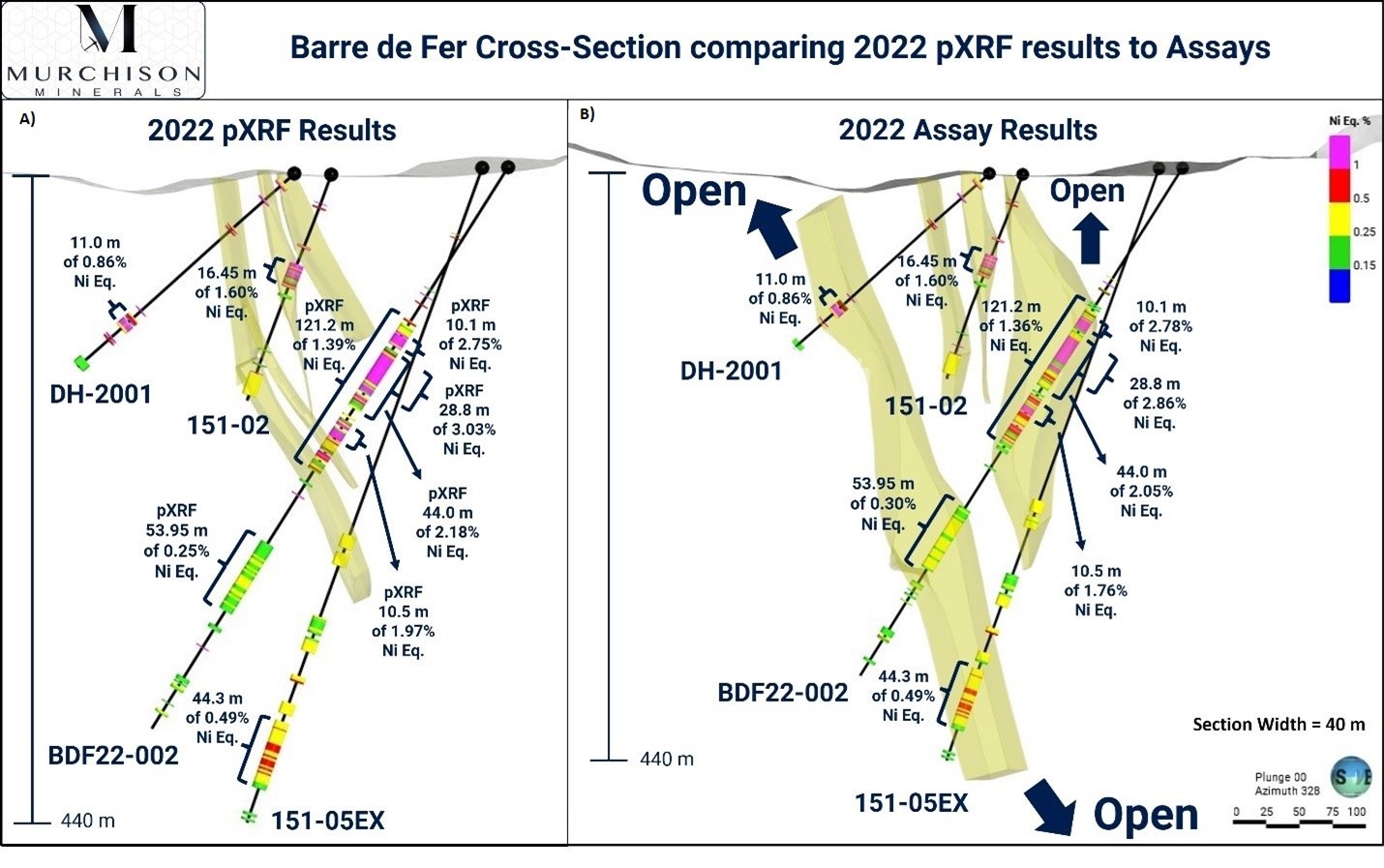 ”“Today’s results speak for themselves, BDF22-002 is one of the top nickel-sulphide intersections made at a pre-resource project globally over the last several years. These results demonstrate the significance of the BDF Zone and overall potential of the HPM Project, which is a clearly one of the few new emerging nickel-sulphide districts globally. Our HPM Project is developing at a time when worldwide nickel demand is slated to increase significantly over the coming years. The opportunity is compounded for Murchison by the fact there is significant pre-existing infrastructure like a maintained highway, rail, and available hydropower all within kilometers of our site. Those fundamentals, along with the fact the Government of Quebec is implementing a vertically integrated critical minerals strategy have us very excited about the future.”

”“The scale of mineralization observed in BDF22-002 is exceptional and confirms BDF is part of a major magmatic nickel sulphide mineralizing system. The results from BDF22-002 are significant milestone for the Company and demonstrate that we are only scratching the surface of the exploration potential at the HPM property. The team is eagerly progressing on the maiden resource at the BDF Zone, and today’s results will be a substantial contributor to that initial resource estimate.”

The mineralization observed in BDF22-002 occurs within two separate zones. The upper zone comprises multi-metre intervals of massive and breccia sulphide within zones of stringer and disseminated sulphide mineralization hosted in peridotite and gabbronorite (Figure 3 & 4).

The lower zone of mineralization (303.55 m to 357.50 m) comprises primarily disseminated sulphide, over a broad 53.95m wide zone hosted within a gabbronorite. 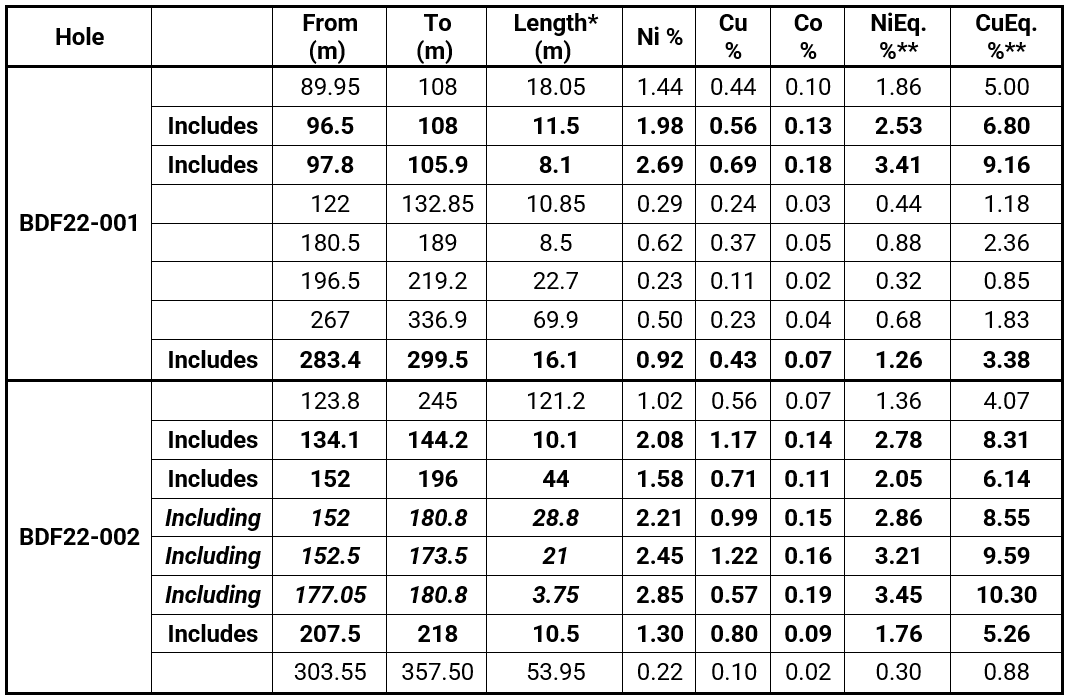 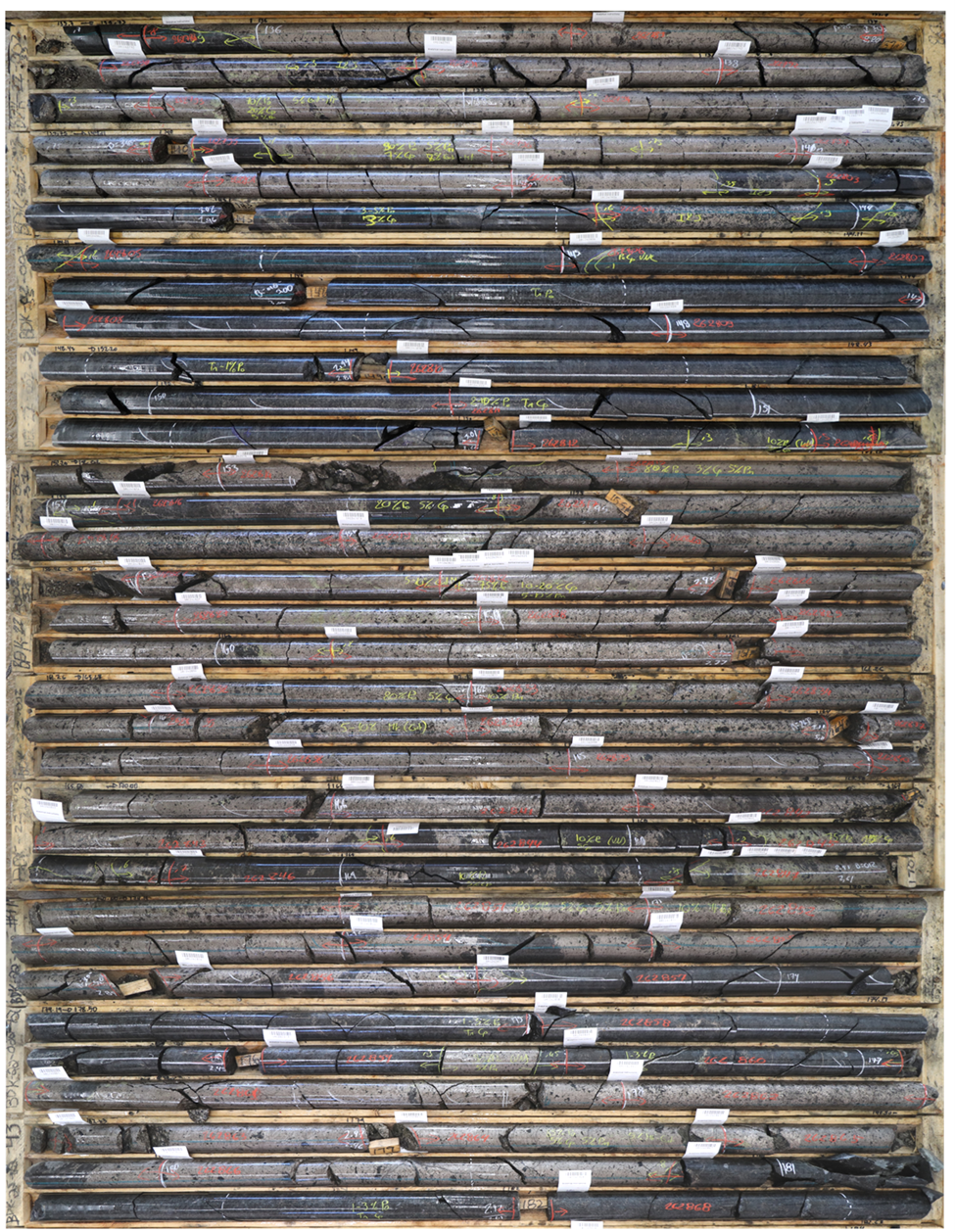 During the 2022 summer exploration program at HPM , a total of thirteen (13) diamond drillholes were completed, comprising 4,316 metres. This includes ten (10) drill holes at BDF, and an additional three (3) holes at Syrah. The pXRF results for the ten holes drilled at BDF were previously released and lab assays are pending for the remaining eleven (11) holes.

Today’s release of lab assay results from BDF22-002 as well as the previously released assay results from BDF22-001 validate the rigorous Direct Rock Sampling (DRS) Portable X-Ray Fluorescence (pXRF) process that the Company developed in advance of the 2022 Summer Exploration Program. The DRS process allowed the Company to produce near laboratory quality results in the field. In turn, this process enabled the Company to model zones of mineralization in real time, creating a dynamic exploration process which was unaffected by laboratory delays faced by many industry peers.

Murchison has implemented and is adhering to a strict Quality Assurance/Quality Control program. NQ-size core was drilled, and mineralized intervals were marked by geologists during core description. The marked intervals were sampled using a core saw, one-half is kept as a witness sample at core facility in Saguenay, Quebec and the other assigned a unique number and placed within a plastic bag. The specific gravity of every 10th sample was measured using the mass-in-air / mass-in-water method. Samples were shipped directly to SRC Geoanalytical Labs in Saskatoon, Saskatchewan. The samples were ground and prepared for analysis by the lab using total digestion. Analyzes were performed using ICP-OES for nickel, copper, and cobalt. Every 25th sample sent to the lab was a field duplicate (quarter core), blanks and certified reference material were also submitted approximately every 25th sample.